Well the last of the field work ended earlier this month, coinciding with the last of the females giving birth a few weeks earlier. Breeding at Hluhluwe-iMfolozi Park (HiP) for 2011 was overall a success with half the packs in the park successfully mating and giving birth.

Despite the positive breeding for the year, unfortunately one pack lost their alpha female from unknown causes, leaving the pack without a suitable female to take on the dominant role. At the time in which the field work wrapped up, the pack still remained a stable group, but it is likely that they will eventually split to form new breeding packs with other individuals from the park. 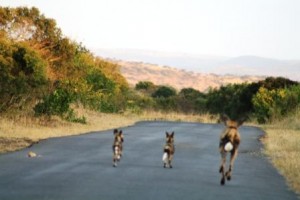 A highlight from this season was seeing two pups from one of the smaller packs at the age of 2 months, with a later confirmed sighting of 3 pups for the pack. Despite a small litter size, this was great news as the pack comprised only 3 adult individuals (2 males, 1 female), and it was great to see such a small pack successfully raising offspring, particularly in the more difficult circumstance of hunting with only 2 to 3 adults and at times being forced to leave the pups unguarded and more vulnerable to predation.

During these final months, we were able to collar several individuals, which is an important part of the management of wild dogs. Attaching radiocollars allows easier tracking and monitoring of packs throughout the park, particularly as many parts of HiP has thick vegetation and is inaccessible to vehicles. 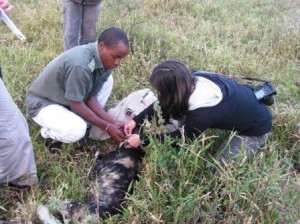 What follows to finalise the project is sample analysis of the faecals   collected from the field. This final part will help the overall project understand the role of various factors that affect reproduction and reproductive success in free-ranging packs. This will add to earlier data collected from zoos that will improve the understanding of breeding in captive situations, and thus increase our knowledge of African wild dog reproductive biology.

On a final note, there have been a large number of people who have been interested and involved in this project at HiP and many thanks go to them all in helping this project run smoothly. I was very privileged to work in the field and follow these beautiful and charismatic wild dogs who allowed me to study and be a part of their daily lives!