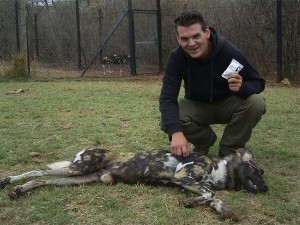 One of the main problems seen in captive held African wild dogs (Lycaon pictus) is inter-pack aggression. Methods that have been applied to prevent or reduce inter-pack aggression, like the use of sedative drugs, have limited success or have negative side effects. The potential of pheromones to solve behavioural problems of domestic animals has started to be realized over the last decade.

Nowadays, artificial analogues of pheromones can successfully be applied in companion- and farm animals to prevent or reduce behavioural problems such as fear and aggression. Although, pheromones are generally considered to be species-specific, some researchers suggest that highly concentrated solutions of pheromones, specific for one species, could be expected to have similar effects in closely related species. Successful artificial pheromone applications for companion animals (e.g. cats and dogs), might therefore be useful tools to prevent or reduce behavioural problems seen in closely related zoo species or for wildlife management.

Some preliminary (uncontrolled) studies show that wild species seem to be susceptible to artificial pheromones, like Feliway®, Felifriend® and DAP®, which are originally developed for domestic species. Dog appeasing pheromone® (DAP®), an artificial pheromone which was originally developed for domestic dogs, may be an effective tool to prevent or reduce behavioural problems seen in canid species, like the African wild dog. The biological function of DAP® in its natural form is to calm and reassure (appease) new born puppies 2-5 days after parturition until weaning. The natural form of DAP® has been identified in the sebaceous glands secretions of the intermammary sulcus of bitches shortly after parturition. The aim of the current study is to evaluate if African wild dogs perceive DAP® and to determine if DAP® has effect on their aggressive behaviour. During the first phase perception of DAP®  was evaluated by comparing the proportion of time subjects spend on exploration of and their behavioural reaction towards areas treated with DAP® or Placebo spray.

These experiments showed differences in behaviour between placebo and DAP® suggesting that DAP® can be recognized.

We have now embarked on the second phase to determine if DAP® has an effect on aggressive behaviour by measuring the number of agonistic, submissive and affiliative interactions. Faecal sample collection will be used to determine if DAP® treatment has an effect on social stress by monitoring corticosteroid metabolite concentrations. This study is currently underway at the Wildt Breeding Centre (South-Africa) and in close collaboration with Professor Henk Bertschinger (University of Pretoria).