So far, various tools have been developed for raising awareness with the aim to impact the maximum number of target groups: school children, peasants, women, as well as decision makers. These tools include video sessions,public events (such as football and handball tournaments), drawing competitions, distribution of posters, leaflets as well as T-shirts bearing important conservation messages.

Since 2010 a “Hippo day” has been organized in the Taï region on a yearly basis. This year (2011), the “Hippo day” took place on July 29th and consisted of organizing an awareness parade across the city, and a public competition between 5 schools from Taï town and 3 surrounding villages. The organized competition had several elements: (i) questions asked to competitors about the pygmy hippos and their habitat after a video projection (ii) poems, drawings and songs; and (iii) tournament of football/hand ball. This year we aimed at rewarding the best pupils at each of the particpating schools.

For one hour, children covered the streets of Taï town with banner and songs advocating the protection of the Pygmy Hippo protection and its habitat. All children were dressed with t-shirts emblazoned with the image of the pygmy hippo and a message for its protection.  This parade and other activities involved teachers and local authorities including the representative of the official management agency for the Taï National Parc.

A video made by Marco Polo on the behaviour of the pygmy hippo was presented to children’s to let them know more about the morphology, biology and habitat of that unique animal. After the video projection a quiz session was organized. In addition children were asked to formulate strong take-home messages.

During this “Hippo day”, we decided in collaboration with the Centre Suisse de Recherches Scientifiques (CSRS), our partner institution, to contribute in promoting excellence amongst pupils, especially girls. The best pupils of the year by school level received important kits including back bags, copy-books and books. The “award ceremony” was another opportunity to advocate for the protection of pygmy hippos.

This competition was followed by many people including adults. During the break time of each match, we broadcasted messages for the protection of pygmy hippos and their habitats and let children give similar messages to their parents.

In 2012 we will involve more schools in our activities and develop another component of the pygmy hippo program through (i) a contribution to improving the working conditions of teachers and pupils by supplying hippo water rollers, and (ii) organizing a workshop between all stakeholders’ involved in the conservation of pygmy hippos.

In 2011, the drawing competition between schools, allowed us to assess the impact of our awareness raising activities (video projection, oral discussions). We were surprised to learn that a child from one of the villages involved in our programme built a pygmy hippo with clay (see picture below) although he had never ever seen a pygmy hippo except from the one seen in “our video”. 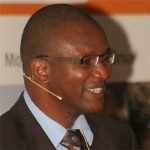