In 2013, funding was secured to move on with additional aspects of The Taï Hippo Project, which is a collaborative endeavor between IBREAM and the Abidjan-based Centre Suisse de Recherches Scientifiques (CSRS). There are currently two students involved in the project, an Ivorian (Mr. Bogui Elie) and Dr Gabriella Flacke (a wildlife veterinarian). The work will be continually ongoing during the coming years as part of both in situ and ex situ integrated pygmy hippopotamus conservation and management.

Bogui Elle will be focusing on understanding the spatial ecology and population abundance of pygmy hippos in Taï, whilst Gabriella focuses on disease, genetics and reproduction of both captive and wild populations. The projects that are ready to be carried out will provide a comprehensive body of knowledge that will ‘pack the biggest punch’ for the formulation of a conservation management plan for the park and for pygmy hippo conservation both in the wild and in captivity.

The work that will be carried our by Gabriella and Bogui falls under a broader-reaching, long-term project initiative to develop a sustainable conservation management plan for the pygmy hippopotamus in Taï National Park, Côte d’Ivoire. The project, “Le Taï Hippo Projet” otherwise known as the THP, is a collaboration between IBREAM and local scholars Dr Karim Ouattara and Dr Inza Kone from CSRS. During the initial phase, an ecologist Wei-Yeen Yup assisted our program by facilitating the first steps to build box traps in the areas where we already had found ample of evidence for the presence of pygmy hippos during the last few years. Here is a little summary of her experience when she assisted the Taï Hippo Project.

Three weeks ago (early january) I left Tasmania, Australia to begin a 6 day airport tour through Malaysia, Sri Lanka, United Arab Emirates, Qatar and Tunisia in order to finally arrive at my destination in Côte d’Ivoire.  The literal translation for this previous French colony is Ivory Coast and this sadly provides powerful context for why our project came into existence.

Côte d’Ivoire used to be famous for it’s lush tropical jungles, endless perfect beaches, huge freshwater lakes, lagoons and waterways and of course thousands of forest elephants.  With the Sahara Dessert in the North creeping further South each year helped by Côte d’Ivoire holding the record for the highest rate of deforestation in the world, the unique tropical ecosystem in the South of this country is under severe threat and faces imminent extinction.  With this extinction follows the extinction of all forest-living species and catastrophic consequences for the people who rely directly and indirectly on the natural resources this forest holds.

Arriving in the main city of Abidjan I spent a day collecting essential supplies before beginning a 12 hour drive into Parc du Taï.  Due to the 2010 war making direct routes to the park inaccessible and dangerous, we had to take the long way around.  This was possibly the longest 12 hours that I have been completely silent and not asleep in my life.  I have read scientific papers regarding the deforestation in Côte d’Ivoire, but I had never seen anything so heart breaking in all my life.  For 12 hours of passing countryside and small villages and hamlets we saw not a single fragment of remaining rainforest.

Suffice to say entering for the first time into Taï National Park was a relief.  Taï National Park is the largest remaining tract of rainforest left in the country. It is also the largest protected tract of Upper Guinean Ecosystem which used to run continuously from Guniea Bissau in the West to Ghana in the East, the ecosystem that the pygmy hippo calls home.

In the last 3 weeks I have found surprisingly high densities of pygmy hippo signs, including fresh tracks and ‘spray’ a marking process where hippos mark low lying vegetation by spraying the plants with a mixture of faeces and urine  using their tail.  The area around my research base in the forest is known to have high densities of hippos from previous biodiversity monitoring surveys and will be the first out of 6 large study sites that we will focus our research on.

During these 3 weeks, with the help of my field assistant Donatien, I have been placing remote sensor camera traps in areas with active pygmy hippo presence in order to prepare for the optimisation and building of traps that we will use to safely capture pygmy hippos for the placement of GPS collars and to collect biological, disease and genetic samples for our research.  This method is used for the study of endangered, cryptic species that would be impossible to study otherwise. 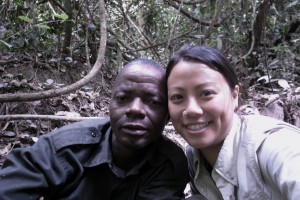 Although it is extremely early to be attempting to determine the status of the pygmy hippo population here, indications do lend to a positive outcome for the species if we can rehabilitate, reclaim and reconnect some of their lost habitat. A daunting task in itself.