The pygmy hippopotamus is endangered in the wild and has been exhibited in zoological collections since the early 1900s; however, it remains one of the most little known and poorly understood large mammal species in the world.

Studies of its biology, physiology and ecology have been limited, both by the often inhospitable nature of its native West African rainforest habitat and by the common misconception that the husbandry and management of the ex-situ population are already optimized.

Most of what we know about this species stems from two radio-telemetry studies conducted in Côte d’Ivoire in the 1980s, a handful of camera-trap and footprint tracking surveys, and observations in zoological facilities; very little analytical, prospective research has been conducted.

The first Conservation Strategy for the Pygmy Hippopotamus identified several key areas for further research on the ex-situ population, including reproductive physiology, polycystic kidney disease (PKD), the female-biased sex ratio, and the potential influence of captivity-associated stress on health and welfare.

The overall aim of this Ph.D. research was to address some of these objectives and thereby also provide baseline data essential for further studies.

Specifically, mortality (causes and trends), the demographics of polycystic kidney disease (PKD) and potential impacts on long-term population viability, reproductive biology of both sexes, and the application of a non-invasive technique for monitoring reproduction and stress are investigated.

After four and a half long years of research and hard work (and also some fun times with the pygmy hippos), I finally submitted the completed version of my Ph.D. thesis in June of 2017 and will graduate in March of 2018.

The thesis is a compilation of several peer-reviewed publications that have resulted from this important and valuable research. The first publication provides background context, and reviews historical and recent literature creating a framework for the research. Several specific issues are discussed in detail, including PKD, the female-biased sex ratio, obesity, the high neonatal mortality rate, and failure of many breeding pairs to reproduce.

The second publication identifies primary causes of disease and mortality for newborn, juvenile, and adult pygmy hippos and presents recommendations for veterinary care, husbandry and management. The information in this chapter forms the first comprehensive review of mortality data (>400 cases) from the managed population since 1982 and significantly expands on previous analyses.

The third publication describes the demographics of PKD, investigates potential inheritance patterns for this condition based on pedigree, and examines the effects of PKD on longevity.

This chapter also includes an age-based survival analysis to assess long-term viability based on historical data and current population demographics. The data in the third and fourth chapters were generated in collaboration with the International Studbook keeper at Zoo Basel.

The fourth publication constitutes the first investigation of female reproductive parameters for this species.

This represents a collaborative research effort between the Southeast Zoo Alliance for Reproduction and Conservation (SEZARC), White Oak, Florida; the Department of Biomedical Sciences, Unit of Physiology, Pathophysiology and Experimental Endocrinology, University of Veterinary Medicine (Vetmeduni), Vienna, Austria; the Chester Zoo, UK; and the Institute for Breeding and Reproduction of Endangered African Mammals (IBREAM).

Together, we characterized the reproductive biology of the female pygmy hippo during gestation, lactation, and the estrus cycle using enzyme immunoassays (EIAs) to measure fecal hormone metabolites.

The final publication was also a collaborative venture between SEZARC, Vetmeduni and IBREAM, and examines androgen metabolite patterns throughout the year for male pygmy hippos.

We explored one of the potential pitfalls of EIA analysis and described a substantial cross-reaction between two assays developed to measure the native hormones corticosterone and testosterone. We also described an EIA that presents biologically relevant patterns in fecal metabolites of cortisol and thus can be used for quantifying individual stress response in pygmy hippos. This information will be published sometime in 2018.

The thesis also provides overall conclusions and management recommendations based on research outcomes. Collectively, the information significantly expands our knowledge base about the pygmy hippo and provides a valuable framework for future studies to further optimize health, reproduction and welfare in the managed population of this endangered and endearing species. 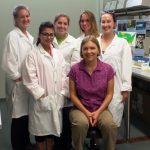 Ultimately, we must apply the data gathered from this Ph.D. research, together with data from wild populations, to guide integrative conservation strategies and secure the persistence of this unique and enigmatic species in perpetuity.

It would be disheartening to imagine the rainforests of West Africa without the pygmy hippo meandering along with quiet footsteps, forever a ghost in the forest.