Ethiopian wolves are medium-sized, territorial canids, endemic to the Ethiopian highlands. They live in family packs of up to 20 individuals, and within a pack there is a dominance hierarchy among both males and females. Within a pack, only the dominant pair breed. However, all pack members help rear the pups by guarding the den and regurgitating prey to the pups and subordinate females may allosuckle the pups. In addition, subordinate males may try to mate with dominant females in neighbouring packs. 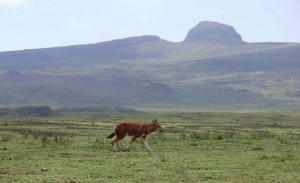 Ethiopian wolves are classified as endangered and this species is under threat by habitat encroachment and disease, notably rabies and canine distemper, which are thought to be transmitted to wolves through domestic dogs that accompany local people living in Ethiopian wolf habitat. With less than 500 adults remaining, the Ethiopian wolf is Africa’s rarest canid. Several conservation measures have been suggested for this species, including reproductive management such as semen banking and captive breeding. However, knowledge about Ethiopian wolf reproductive physiology was previously lacking. My research therefore aimed to study the reproductive physiology of both male and female Ethiopian wolves through the collection of fresh faecal samples (in which hormones can be measured) and behavioural observations.

As there are no Ethiopian wolves in captivity, I had to conduct my research on a wild population. Bale Mountains National Park in Southern Ethiopia has the largest remaining population of Ethiopian wolves, and its population has been well studied for more than 20 years by the Ethiopian Wolf Conservation Programme (EWCP). For my research, I spent three 8 month field seasons (from July-March) in Bale, following wild wolves on foot and collecting faecal samples whenever a wolf defecated, as well as recording behavioural observations. The faecal samples were later sent to the Human Reproductive Sciences Unit in Edinburgh, where I analyzed them for oestradiol, progesterone, testosterone and cortisol. 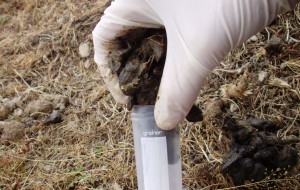 Over the course of the three field seasons, I observed dominant males preventing subordinates from mating with the dominant female several times, suggesting a behavioural mechanism of reproductive suppression. I did not find seasonal patterns in testosterone or cortisol levels, although dominant males had higher average testosterone and cortisol levels than did subordinates, which may be related to higher rates of aggression and mate guarding in dominant males of group-living canids, a pattern also reported in African wild dogs, Lycaon pictus.

I analyzed and wrote up these results as a thesis, which I submitted in March, and was examined on in June. I am also in the process of submitting these findings as papers to scientific journals. I hope the results found will contribute to the conservation of Ethiopian wolves and their future reproductive management. IBREAM, in collaboration with EWCP and the Ethiopian wildlife authorities, is working on an Ethiopian wolf semen banking project, which will hopefully help preserve genetic material from this rare charismatic canid. 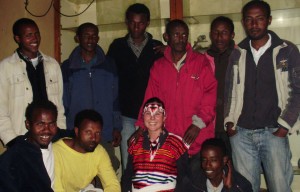 I could not have conducted this research without financial support from IBREAM, the Prins Bernhard Cultuurfonds and Queen’s College Oxford. I would also like to thank the Ethiopian Wildlife Conservation Authority for their support of this research. Lastly I would like to thank my academic supervisors Prof. R. Millar, Prof. D. Macdonald, Dr. C. Sillero-Zubiri and Dr. M Paris for their support and supervision.